I’m a Nigerian filmmaker born and raised in the UK. I graduated from De Montfort University with a degree in a Media Production. I’ve worked on Short Films, Music Videos and now my first feature film MUM DAD MEET SAM, which I co-wrote, co-produced and star in.

I can’t tell much of a difference. Films that have been bracketed under that umbrella appear the same to me. The turnaround for shooting and putting out a film are relatively quick both in the UK and Nigeria and the production budget tends to be low.

When I first started working on MDMS (MUM DAD MEET SAM) things that would occur that we hadn’t planned for would take me by surprise. A year down the line and being so heavily involved in the project we get “surprises” on a daily basis. Now I am prepared for anything. And by that a lot of the times I can anticipate something before it happens making me pro-active rather than reactive. It’s all about how you handle a situation.

I’ve been told different things but nothing that has really stuck with me. To be honest I think it’s better that way. Learning on-the-job has been invaluable and luckily for me I didn’t have any expectations going into this. So sorting contracts, driving crew to set and making breakfast for a cast and crew of 15 (to name a few) were all normal to me.

Working on an independent feature film as a producer is a huge job and there’s no “right” or “wrong” way to do it. Just know that your job is never ending lol. 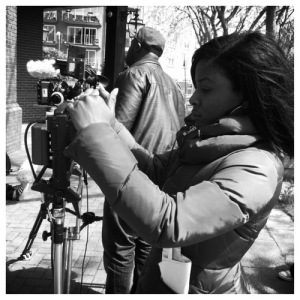 Everything you would get in Nollywood Nigeria but in the UK. Ha-ha!

Ensuring things get done and by that I mean everything. Saving money has become my middle name. I try to cut costs where possible without jeopardising the standard of the film. Finding solutions to any problems and ensuring every member of the project is playing their part are all crucial to me.

Getting funding for films is a major issue. And that’s across the board. You have talented individuals with amazing stories to tell but they struggle to secure finance for their projects so what happens to them? They have to jump through so many hoops and change their stories to suit the people investing and end up with something that’s far from what they started with. And that’s if they even get that far. You currently have the industry with the same people making the same films as this seems to be their proven formula but that keeps Nollywood in a stagnant position, meaning aside from a few directors actually making impressive films, we have the same people controlling what we see on the screens. I think supporting new and rising talent is key to putting Nollywood on the global map and making us a force to be reckoned with.

I wanted more control over the content I’m involved in. It’s too easy to sit down and let someone dictate what you should be doing and then complain about it because you don’t like it. So why not take full responsibility…

I, Edith Nwekenta, declare that I am a film producer.

It’s been a very interesting one. Whilst at university shooting and editing films I decided that I had a real interest in acting which I decided to pursue once I graduated. So after doing some training, I set out auditioning and shooting films. However, I quickly found that most of the roles available were the same stereotypical roles i.e. ex-girlfriend, pregnant ex, angry ex, then I realised being an ex in everything is not my portion. So whilst working my day job at Channel 4 in portfolio management I decided to start writing my own projects that way I can write the characters that I want to see on screen. I teamed up with Ola Laniyan and we wrote the award winning UNSPOKEN directed by Sunny King. From then I knew that creating content was something I’m passionate about. Who better to write roles for a female than a female? 2012 was the beginning of MUM DAD MEET SAM and here we are today. I have a short thriller film PREY written by myself and directed by Sunny King which is in post-production. This film is definitely something that will get people talking. I have a few projects lined up for 2015 and beyond so watch this space.

Wow, there have been quite a few. Watching a film that drags on and on and at the end of the film discovering there’s no real storyline. Seeing the same kind of films being churned out over and over again. And watching films where care has not been taken with the overall quality (sound, lighting, and acting). These are all crucial factors to making a decent film let alone a film that is exceptional.

Very excited and blessed to have been on an incredible journey that’s still on-going.

Yes. Study, study, study. Know your craft like the back of your hand. Acting is so competitive and very saturated so make sure you are the best at what you do. Get us much experience as you can. Most importantly have fun with it, if you can’t enjoy it then it’s not for you.