DIVINE INTELLIGENCE FILM IS FINALLY OUT! 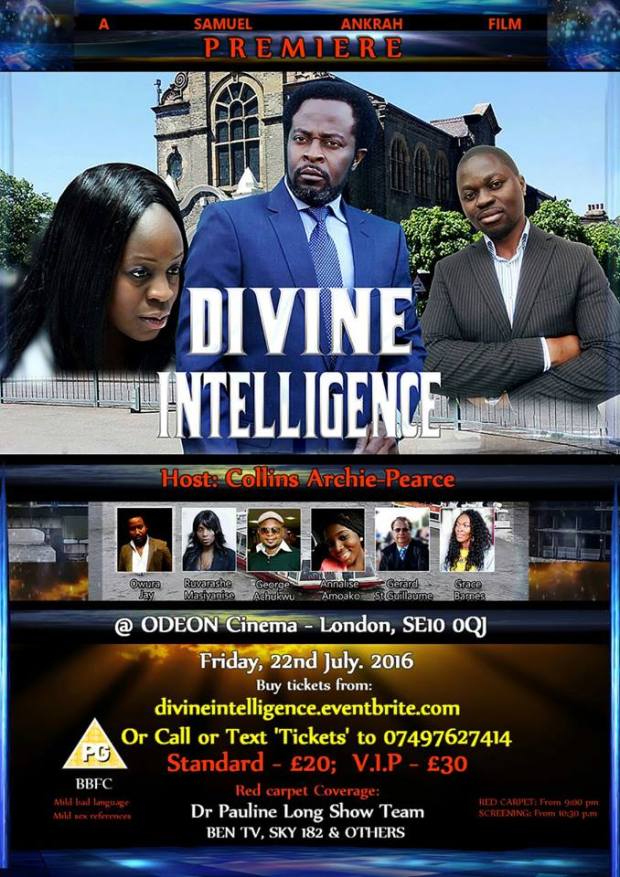 The long-awaited film, Divine Intelligence, is finally here with us. The highly entertaining, educative, enlightening and strategically comical film full of subtle suspense has been given a ‘PG’ Cinema Release Certificate by the British Board of Film Classification. The film is going to be premiered on the 22nd of July, 2016, at the Odeon Imax Cinema in Greenwich, Bugsby Way, London, SE10 0QJ.

Written and directed by Sammy Ankrah, film primarily deals with the growing phenomenon where charlatans have besieged the church nowadays, using all sorts of fake and corrupt strategies in the name of God to deceive the unsuspecting followers, for their parochial interest. This  phenomenon, according to the creator of the film, is negatively affecting the work of genuine preachers who  go about their divine calling with all good intent. It creatively exposes some of the cunning strategies that these fake and corrupt ‘men of God’ adopt to carry out such despicable activities, enabling viewers, especially those who subscribe to their services, to be aware of such schemes, so as not to fall victim to the tricks of these charlatans.

The film’s cast consisted of actors and actress from different denominations and ethnic backgrounds including English, Caribbean, Nigerian, Sierra Leonean, Ghanaian, South African, Zimbabwean, Swazi, etc, origins, all based in the UK.

The film, however, is not  just about  the activities of ‘corrupt’ preachers. The story is created for all viewers, with an interesting plot which deals with other real life issues. It is worthy to be watched and enjoyed by all viewer. It contains the anxiety, subtle suspense and the humour that you would wish to expect in a good  film.

A Corrupt man of God tries to recruit a “bad” girl into his team of accomplices to advance his corrupt practices. He, however, has no idea of the true nature of this new recruit. The girl on the other hand, has a different expectation from what the man of God plans for her. Meanwhile, the man of God is unaware he is being investigated by a police unit one of whom is a member of his church and a close associate to him. Find out what happens as the drive to satisfy personal agendas set the ball rolling for the plot of this highly entertaining, educative and  informative artistic piece.

For further information and/or to express a desire to sponsor the Premiere, contact info@divineintelligencemovie.com or creativityvisionsltd@gmail.com, or call 07497627414.